One year ago NWS advisory map... One year ago at his time we were facing a still rapidly intensifying CAT 3 Harvey offshore of the Texas Coast. Outer Rain bands would follow later in the day in Houston as CAT 4 Harvey moved onshore near Port Aransas. That began the Catastrophe that would unfold over the next 5 to 6 days...

Just a side note - i am seeing alot of stories i didnt see because we lost internet and cellphone service. Still gives me chills just revisiting Harvey and its devastation.
Top


mckinne63 wrote:I want to thank everyone for keeping us updated on all that is going on. Because of this forum, we are prepared. Though can't really prepare for unprecedented flooding. The area I live in isn't prone to flooding but with so much rain and a few drainage canals near us, I am really afraid. During Allison we had flooding in the street and lapping up the driveway, but did not get close to the house. Praying for everyone.

A station at Aransas Pass run by the Texas Coastal Observing
Network recently reported a sustained wind of 74 mph (119 km/h) with
a gust to 96 mph (154 km/h).

Rainbands along the eastern edge of the circulation of major hurricane Harvey have been training for the last several hours from the western end of Galveston Island to near southern Waller County. These bands have not moved NNE into Harris County at this time, but there is the potential for the bands to gradually edge slowly into Harris County, especially the SW portions over the next several hours.

Note:
Water levels in Clear Lake have risen to 4.0 ft and 4.3 ft near Nassau Bay due to strong easterly winds piling the water into Clear Lake

Widespread rainfall amounts of 3-6 inches has fallen over Matagorda and Brazoria Counties with totals of 2-4 inches across Jackson, Wharton, and Fort Bend Counties

Rainfall totals in the eyewall region have already exceeded 12-15 inches.

The attachment 08262018 Jeff 2 untitled.png is no longer available

A devastating hurricane landfall has occurred with many reports of structural damage and collapsed homes/buildings. Numerous towns have 911 calls with trapped persons inside collapsed buildings including: Portland, Rockport, Refugio, and Port Aransas

Many observation sites have either failed or lost power so we are getting very few winds reading any more. The surface pressure has risen from 938mb at landfall to 956mb currently and sustained winds have decreased from 130 to 110. Hurricane force winds…mainly in strong gust will continue to affect the Matagorda Bay region and SC TX/brush country through late morning.

Damaging storm surge continues to fill NW Matagorda Bay with Port Lavaca currently reporting a surge of 7.47 ft (appears near peak) and Seadrift on the eastern part of San Antonio Bay reporting 5.40 ft. Given the position of Harvey, continued strong (near hurricane force) winds will continue to push water into Matagorda Bay and pile it into the upper portions of Lavaca Bay around Port Lavaca and Point Comfort

Rainfall:
Overall event will be transitioning to a flash flood/flood event today and continue for the next several days. Heavy core rainfall continues near the center with rainfall totals already nearing 15 inches. Significant banding continues to develop and train NW across SE TX especially over Fort Bend and Brazoria Counties where widespread rainfall of 6-8 inches has occurred overnight with isolated totals of up to nearly 10 inches. A LCRA gage at Bay City has recorded 8.92 inches in the last 24 hours.

Recent discussion from WPC highlights the I-45 corridor through the morning hours for the formation of very heavy rainfall and this appears possible given recent radar trends showing rapid development of numerous training cells over the NW Gulf and the slow approach of an impressive feeder band currently moving into Fort Bend and Brazoria Counties. Hourly rainfall rates have been increasing on radar into the 2.0-2.5 inch range. Trends on radar will need to be monitored closely over the next several hours

Tornadoes:
There have been numerous tornado warnings overnight with cells moving across Brazoria and Fort Bend Counties. These cells are racing NW and producing short lived tornadoes. One touch down in Missouri City has produced damage to homes and minor injuries. Additionally, the stronger cells in the feeder bands are resulting in the transport of higher momentum to the surface and wind gusts of 45-55mph which is causing some power outages. 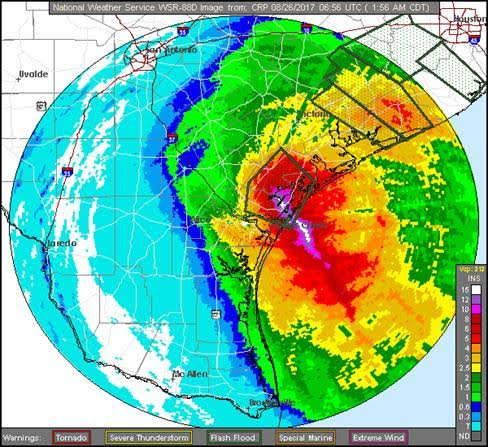 Flash Flood Warning for south and central Harris County until 845am

Strong feeder band is approaching from the SSW and converging with numerous incoming cells moving inland off the Gulf of Mexico. A quick 2-3 inches of rainfall will be possible over the SW half of Harris County over the next 1-1.5 hours.

Street flooding is the main concern at this time, but rises on creeks and bayous will commence with these heavy rains.

Air images today from the landfall areas around Rockport, Port Aransas, and Aransas Pass shows significant structural damage has occurred and some buildings and homes were completely blown apart.

As bad as it is across the coastal bend…the attention must now focus on the potential for continued widespread heavy rainfall and the impacts of this rainfall.

Rainfall amounts of 15-20 inches with isolated totals of 30 inches or greater will be possible across the a large portion of SC and SE TX and the Coastal Bend. This result of this rainfall will be nothing short of historic and catastrophic.

Forecast from the river forecast center are as follows:

I want to caution everyone that these forecast are based on WPC QPF for the next 72 hours and the following levels are being produced. Understand that there is uncertainty there and that shifts in the highest rainfall could change these forecasts.

Harris County Bayous and Creek: numerous points are forecast to reach minor to major flood levels. However we are extremely sensitive to how fast and where the rain falls and what kind of rises that will produce on these specific watersheds. We will have a better idea of how the Harris County bayous and creeks will react as the rainfall pattern unfolds.

Strong feeder band moving into the western portion of Harris County producing excessive short term rainfall rates of 2.0-2.5 inches. Total rainfall amounts in the last 24 hours has averaged 6-9 inches from Sugar Land near Katy and over northern Waller County. This band may produce rainfall of 2-4 inches over the next few hours.

Feeder band producing intense rainfall rates of 3-5 inches per hour moving slowly ESE over SC Harris County. Several HCFCD FWS gages have recorded over 4 inches of rainfall in the last hour and an additional 2-6 inches of rainfall in the next hour is likely. Dangerous flash flooding is likely along with rapid rises on area bayous and creeks…some to levels that will result in flooding. Travel is strongly discouraged and many roadways are quickly becoming impassable….remain at your current location!

6.5 inches in 1 hour on Beamer Ditch in SE Harris County is 1 inch over the 500-yr rainfall frequency

Slow moving intense feeder band producing 4-6 inch per hour rainfall rates resulting in extremely dangerous flash flooding conditions. Additional rainfall of 4-6 inches on top of what has already fallen is likely resulting in 2 hours totals of 8-11 inches over some areas.

This is a life threatening flash flood situation. Do NOT travel!

Flash Flood Emergency expanded and extended until 145am for Harris County.

Going back through some saved graphics and I found these HRRR precipitation forecast. I began truly sinking in that SE Texas would be in serious trouble from flooding very heavy rainfall over the next 18 hours and beyond.

A year ago this morning we had endured a long night of extremely heavy rainfall across some of SE Texas, where rainfall rates of 3 to 5 inches per hour were common in those areas that were impacted my a series of stalled feeder bands and their excessive training very heavy rainfall. the old KHOU Studios on Allen Parkway were in the mist of their final broadcast from that facility as waters from Buffalo Bayou began entering the ground floor. In a short hour or two this time last year, their transmitter would be flooded and Channel 11 went blank for 7 hours until the Staff could be evacuated and could establish a make shift facility at the University of Houston/PBS Channel 8 studios. Last Sunday I visited those facilities at U of H and toured their Operations today. I am still in amazement that KHOU is able to broadcast. It speaks volumes to their dedicated Staff from Anchors, Reporters, Producers and their IT and Technical teams that literally operate out of a room filled with banks of folding tables and chairs with laptops on the tables to an 18 Wheel Transmitter Truck parked outside with a tremendous amount of Air Conditioning piped in to keep the computers "cold" enough to send their signal out to the World. The make shift News Studio has become almost as you would expect from the 4th largest Television Market in the United States. Thanks for the tour, Blake. I now fully understand the difficulty it been just to keep us all up and running, even to our very own KHOU Weather Forum.