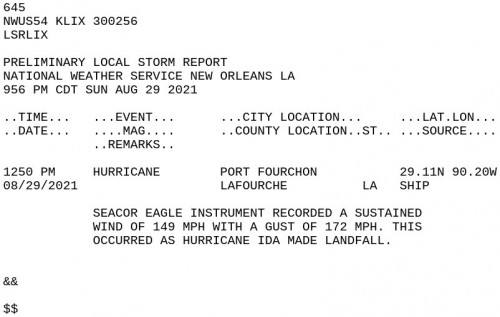 Man, that’s incredible. What a storm! Ida will surely be retired and be one for the history books.
Top

This first tweet is not confirmed. The quote cannot be attributed to any credible source and I can't find it anywhere else. Someone posted the same on Storm2K and I deleted it.

IS the Cajun Navy true? I gave it over to the Deaf Community for info
Just because you're disabled, you don't have to be a victim
Be Weather Aware & Prepared!
Barbara Jordan Winner in Media
Disability Integration Consultant
Top

IDA will definitely be remembered as one of the most catastrophic hurricanes in history, definitely top 10, prayers for Louisiana, they got a long road ahead of them
Top

Some levees failing south of NOLA.

A ship's superstucture can funnel and accelerate winds, and thus winds reports from ships should be taken with a grain salt. Anthem of Seas was reporting winds of 120mph to even 180mph while sailing through the remains of a tropical storm. Obviously, the remains of Hermaine were not as strong as a major hurricane.
Top

VFR throughout as scrappy low stratus is forming well west of even
CLL this morning. North/northwest winds to start, gradually
backing through the day to more west and even southwest through
the day. Very low rain chances - only enough confidence to
introduce VCs from HOU coastward.

August looks to close out on the hot side, with relatively low
chances of rain, particularly well inland. As we transition into
September, the weather looks to transition as well, with
temperatures backing down closer to seasonal averages and a more
seasonable amount of scattered showers and storms.

Afternoon heat index values look to rise to around or above 105
degrees until late in the week. And though we are marginal at most
for any kind of heat advisory, we can`t quite forget about heat
stress just yet - particularly if you must spend significant time
outdoors and in the sun. Even as temperatures start to come down
a little as the week goes on, that will likely be outweighed by an
increase in humidity.

As of 4 AM CDT, Ida has become a tropical storm as it continues to
push inland towards Mississippi from Louisiana. One tendril of an
outer band continues to generate showers and thunderstorms over
our Gulf waters off Galveston Bay, so while impacts to our area
are not significant, we are not completely untouched. These storms
should stay offshore, but if the band is able to reach inland,
there could be some early morning showers/storms for locations
like Angleton, Bay City, and Wharton.

The main story for today and tomorrow is likely to be the heat. As
Ida departs the region, we can look for high temperatures to reach
up into the upper half of the 90s for a large chunk of the area.
Even at the coast, which will see some moderation from the Gulf,
highs in the 90s are expected. Heat index values around or above
105 degrees in the afternoon look pretty likely, but don`t expect
things to escalate to the point of needing a heat advisory. Of
course, we`re still pretty close, and awareness of heat
stress/injury is just a good thing to have in the summer around
here anyway, especially if you must spend significant amounts of
time outdoors without shade during peak sun.

A few showers and storms should probably crop up through the day,
but while I`ve got pretty high confidence it will rain somewhere
in Southeast Texas today, the odds for any given spot in the area
are also pretty low, as coverage is unlikely to be very high. The
best shot for the atmosphere to squeeze some convective activity
out is probably coastward of I-10, as the offshore flow will mean
an influx of relatively dry air for the northern bulk of the
forecast area. With winds backing more through the day on Tuesday,
we could catch enough of a moist connection to spur more
seasonable development. I do boost PoPs more into the chance range
to reflect that, but it could well end up a bit more on the dry
side if winds get hung up more out of the southwest and we end up
capped instead.

As Ida`s remnants move northeast into the TN Valley, a weak upper
level trough will drag southward into the Upper TX coast/Coastal
Bend by midweek. This feature will develop a line of convergence
extending from middle/east TX into the Florida Panhandle. This
axis/boundary will serve as a focus for showers and thunderstorms
mainly in the afternoon with peak daytime heating. Global models are
not handling well this feature. GFS and EC still bring this band
over our forecast area while NAM suggests a drier solution. Given
inconsistencies on the location of the moisture axis and coverage,
have kept 20 to 50 percent chance of precipitation Wednesday and
Thursday with the best chance along and south of I-10 and over the
Gulf coast waters.

Mid-upper level ridge builds in over the central CONUS Friday into
the weekend, bringing drier air into the region. In fact, PWs drop
into the 1.0 to 1.5 inch range. It won`t be completely dry...our
region will be positioned south of the ridge, therefore, different
shortwaves embedded in the easterly flow aloft will move through the
region. With that said, isolated to scattered convection will be
possible each day, especially in the afternoon and early evening.
Unsettled conditions look to return early next week with
deterministic models bringing a surge of moisture as an inverted
trough moves through the Gulf. However, confidence is very low at
this time.

Temperature-wise, near to slightly above normal high temperatures are
expected through the period with afternoon readings mainly in the
mid 90s.

Rain/storm bands associated with Ida will continue to move/develop
over the coastal waters today. Gusty winds will be possible with any
strong storm. Seas have remained less than 5ft over the past hours
and is expected to continue decreasing today. Some gusty winds 15-20
knots will still be possible at times, especially over the offshore
waters. Small Craft Should Exercise Caution conditions are expected
offshore through mid-morning. The main risk today will be along area
beaches with a high risk of rip currents. Given that, have issued a
High Rip Current Risk through this evening. Moderate west winds will
gradually transition to the south-southwest late this afternoon.
Caution flags may be needed tonight. For the remainder of the week,
light to moderate onshore winds will prevail with seas from 2-3 ft.
Isolated to scattered thunderstorms will be possible each day.

GM...SMALL CRAFT SHOULD EXERCISE CAUTION until 1 PM CDT this
afternoon for the following zones: Waters from High Island
to Freeport TX from 20 to 60 NM.

Apparently a large transmission tower fell in the Mississippi. If true, Nola will he without power for a while.
Top


NWS Houston
@NWSHouston
The city of Houston has gone 365 days with temperatures below 100 degrees. The last time the temperature reached 100 degrees was on August 29 2020 (101 degrees). #houwx
Carla/Alicia/Jerry(In The Eye)/Michelle/Charley/Ivan/Dennis/Katrina/Rita/Wilma/Humberto/Ike/Harvey

NWS Houston
@NWSHouston
The city of Houston has gone 365 days with temperatures below 100 degrees. The last time the temperature reached 100 degrees was on August 29 2020 (101 degrees). #houwx