Well, could we see mischief? Will we see an abnormal August cool front? ( it happened in August 2004)
Top

The Big Suck is lurking.

Will it go full Death Ridge, or will weakness persist?
Top 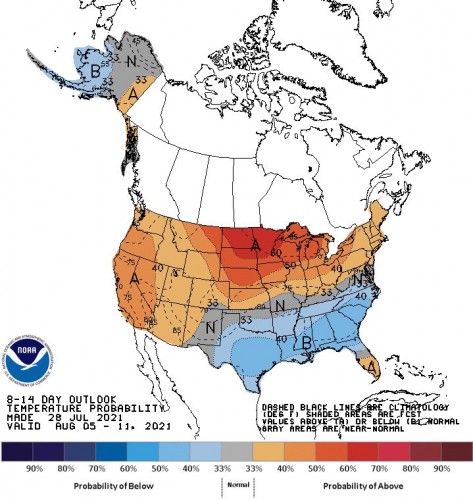 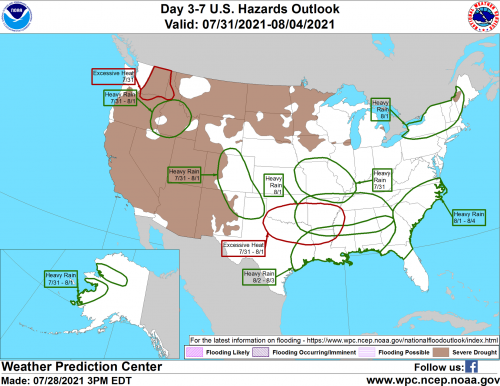 srainhoutx seems like the CMC wants to stall this potential backdoor front next week while the GFS pushes the front all the way through, will be watching the GOM closely for any tropical mischief
Top

Very nice to see after a 7-10 days of frying. Still holding.

Man the Atlantic sure has been quite..but the pacific is rolling
Top

Kingwood36 that is about to change really soon lol
Top

Yep Stratton20, it feels like the calm before the storm across the Atlantic Basin.
Top

Katdaddy Something to watch for is the front next week, at that time the MJO will be crossing into the Atlantic, its possible we could see a quick spin up in the gulf next week despite models not showing anything, wind shear looks favorable right now, sea surface temps in the gulf are extremely warm as well as the GFS indicating a lot of rising air next week and beyond, definitely will keep my eye on it
Top

A line of broken showers has passed Round Rock. Maybe showers after midnight in CLL. Everything is parched out there. Off to fertilize and water.

Tomorrow, Tuesday, and Thursday are the best chance for rain.

A weak wind shift coupled with falling 500 mb heights in
association with a deep long wave trough over the Great Lakes that
extends into Texas will provide area TAF sites with a chance of
showers and thunderstorms late tonight and intermittently on
Monday. models are in general agreement on precipitation
development but differ significantly with timing and placement.
Ultimately, meso-scale influences will likely determine the when
and where. 43

Showers and thunderstorms are beginning to flourish again near
the coast on the seabreeze, and this scattered convection should
be expected to continue until early this evening, gradually
propagating inland until that time. Where it`s not raining, we
also have persistence on the temperature front, with all but the
coast rising into the lower to middle 90s this afternoon, with
triple digit heat index values.

But despite today having all the trappings of yet another day in
our recent summery stretch, change does not lurk too far off. A
cold front is pushing across the Red River, and will continue to
make its way slowly southward, led by a broken line of
thunderstorms. It`s important not to put too much weight on the
"cold" part of this cold front - it is just the beginning of
August, after all. But it does look like it will stay coherent
enough to become the focus of the area`s weather in the northern
part of our forecast area late tonight, and spread southward
through the day Monday.

As one would expect for a summertime front, there`s not much cold
air to speak of behind it - 850 temps look to show some modestly
cooler air, but it`s more likely that any cooler temperatures on
Monday will simply come from increased cloud cover and rain to
hold the daytime rise in temperatures down. But, given a pretty
solid stretch of hot conditions in the area, any relief is better
than none. With the front so far divorced from any real upper
support, severe weather isn`t a particularly big concern. We can,
of course, frequently manage an isolated strong or severe storm
just on the strength of instability alone supportive an explosive
updraft, but any organized threat appears minimal.

One avenue we may need to watch a little more carefully is the
potential for localized heavy rain. A front that will be in the
process of stalling out somewhere in the area, plus potential
training/slow storm motion with mean winds more parallel to the
boundary, and precipitable water exceeding two inches checks some
of those heavy rain boxes. The environment isn`t likely to cause
much alarm for a widespread flooding threat, but there`s enough
signal that we`ll probably be keeping an eye on where and how long
the strongest storms are occurring.

For Tuesday models consistent showing the weak cold near the
coast with an associated band of showers and thunderstorms and a
wind shift accompanying it. This boundary slowly shifts S with
time with winds likely becoming NE even across the coastal waters
on Wednesday. Both GFS and ECMWF models indicating precipitable
water values in the 2.25 to 2.4 inch range in a band bracketing
front suggesting potential for locally heavy downpours and even
localized flooding as mentioned in the short term discussion.

Somewhat drier air filters in from the NE on Wednesday with the
threat for heavier rains by that time limited to far SW counties
and even more the adjacent Gulf waters. In fact the operational
runs of the GFS...ECMWF and Canadian mostly rain-free inland for
Wednesday and Thursday so have trimmed pops and have gone a
little under the NBM for inland counties for that period. Will
see likely some only modestly drier...less humid air with daytime
dewpoints dropping back into the 60s for inland counties...for
Wednesday into Thursday...although still a good deal of
uncertainty in this aspect for Houston and points S and SW.

An upper level trough/shortwave trough brushes the area Thursday
night. Cant rule out a few showers with this...but better forcing
and lift should remain north of the area and airmass has dried
out some by then...so not increasing POPs for this period at this
time...just something to evaluate as that period gets closer.

Next weekend...front will have dissipated...flow becomes more
onshore. Ridge builds somewhat aloft. All of this spells a more typical
summertime hot...humid summertime pattern with the daily
possibility of a thunderstorm. Will see a return to a more a
diurnal cycle for convection with morning storms waters and
coast...and mainly afternoon storms inland as seabreeze propagates
in from the coast. Less coverage and lower POPS than the Monday
night and Tuesday time period...more like we have seen the past
few days.

A backdoor cold front will drop down from the north and approach
the waters on Monday...then into and possibly across the waters
on Tuesday. This will bring with it an increase in shower and
thunderstorm coverage...and a wind shift from SW to NE from N to S
across the Bays and into at least the immediate coastal waters.
Speeds will be mostly on the light side...with winds and seas
generally remaining below caution or advisory levels. Only caveat
will likely see locally higher winds and seas in and near
thunderstorms. Unsettled rainy conditions will continue over the
coastal Gulf waters on Wednesday and Thursday as front lingers
over the area.

The front dissipates by Friday with onshore flow returning. Will
then see more of a typical diurnal cycle becoming established with
thunderstorm chances mainly in morning and light to occasionally
moderate S to SE winds continuing into the weekend. This
increasing onshore flow will bump seas from mainly 1 to 2 feet
through Thursday...up into the 3 to 4 foot area Friday and
Saturday.

Users browsing this forum: No registered users and 44 guests