...THERE IS A MARGINAL RISK OF EXCESSIVE RAINFALL ALONG THE MIDDLE
AND UPPER TEXAS COAST AND SOUTHWEST LOUISIANA COAST...

21Z update... The latest CAMs have slowed down a bit during the D1
period, which bleed over into the beginning of this period,
keeping QPF and some localized higher amounts over parts of
Arkansas, Louisiana and eastern Texas along the front as it passes
through. The best signal for the heaviest QPF continues to be
along the Texas coast as previously mentioned. In coordination
with the local forecast office in San Antonio, the Marginal Risk
area was expanded westward to just east of I-35 to account for
this trend and the latest WPC QPF. The areal average for this part
of the country will be 1 to 3 inches, but isolated locally higher
amounts of 5 to 6+ inches may be possible.

Previous discussion... There is an increasing signal in hi-res
model guidance for a heavy rainfall event on Saturday,
particularly on the Texas coast between Victoria and Houston. The
00Z HREF has produced 25-mi neighborhood probabilities of 5 inches
of rainfall in 12 hours of 15-30 percent in that same area between
12Z Saturday to 00Z Sunday. This seems to be from a combination of
linear convection arriving along a surging cold front from the
northwest, as well as convective clusters emerging from a
low-level theta-e axis in the western Gulf of Mexico in the
morning. The environment will be supportive of heavy rain rates,
with precipitable water values approaching 1.7 to 1.8 inches and
moderate amounts of instability (MUCAPE 1000-1500 j/kg), and rates
up to around 2 inches per hour would be possible. Nevertheless,
antecedent conditions are somewhat dry with rainfall over the past
30 days around half the normal values, and portions of the area in
D0 abnormally dry drought classification. Therefore, the Marginal
Risk has been maintained for now, although a Slight Risk was
considered. Given the dry ground conditions, the interaction of
heavy rain rates with urban areas (and how long those rates could
be sustained) will likely be important in determining the eventual
flash flood risk, and thus trends in the rainfall forecast
relative to the Houston metro area will be important.
Top

Sucks. Wife and I had planned to go to the Marriot lazy river in downtown tomorrow since it's been so hot and lo and behold we have severe thunderstorms and heavy rain coming. Go freaking figure.
Top

SPC has upgraded southeast TX to a slight risk: 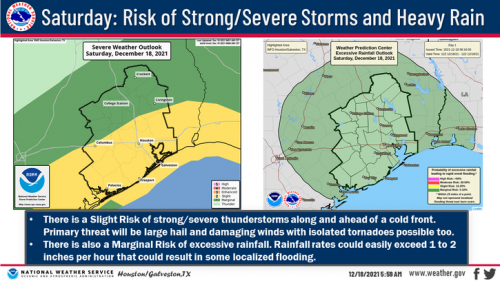 ...THERE IS A SLIGHT RISK OF SEVERE THUNDERSTORMS COASTAL SOUTHEAST
TX AND SOUTHWEST LA...

...SUMMARY...
Scattered severe storms will be possible through this afternoon
across coastal southeast Texas and southwest Louisiana. Damaging
winds and large hail should be the main threats, however a couple
tornadoes may also occur.

...Southeast TX to south LA...
Scattered thunderstorms are ongoing in vicinity of a
southeast-surging cold front that is draped from the Ark-La-Tex to
the TX Hill Country. The greatest severe potential should emanate
out of pre-frontal convection near/east of the I-35 corridor in the
heart of TX as it spreads towards the coastal plain today.
Insolation will be limited by both abundant low and high-level
cloudiness. But even minor boundary-layer heating of rich moisture
characterized by 67-71 F surface dew points will result in a broad
plume of moderate buoyancy with MLCAPE of 1000-2000 J/kg.

The 06Z NAM has backed off somewhat from its outlier scenario with
convection-induced strengthening of 850-700 mb flow. Other guidance
suggests low-level winds/hodographs will continue to have pronounced
weaknesses which should temper the overall tornado threat.
Nevertheless, around 40-kt effective shear should foster potential
for transient supercell structures. In addition, a deepening cold
pool could support potential for semi-organized linear clusters
capable of producing strong to locally severe gusts, especially
towards the immediate coast. The best chance for large hail will
exist along the western flank of thunderstorm development across
south TX given initially steep mid-level lapse rates with a
pronounced EML sampled by the 12Z CRP sounding. But convection here
will generally be undercut through the afternoon as the cold front
pushes south-southeast.
Top

Lots of discrete cells out in front.
Top

I noticed that as well...

* At 1057 AM CST, severe thunderstorms were located along a line
extending from near Cut And Shoot to near Shenandoah, moving
southeast at 45 mph.

For your protection move to an interior room on the lowest floor of a
building.

Why is that when I attempt to visit into this site I get a warning about the connection not being secured? This is happening for me across multiple devices.
Top

* At 1140 AM CST, a severe thunderstorm was located over Langwood, or
near Spring Branch North, moving southeast at 30 mph.

For your protection move to an interior room on the lowest floor of a
building.

Intense thunderstorm lines can produce brief tornadoes and widespread
significant wind damage. Although a tornado is not immediately
likely, it is best to move to an interior room on the lowest floor of
a building. This storm may cause serious injury and significant
property damage.
Top

Waded wrote: ↑
Sat Dec 18, 2021 12:03 pm
Why is that when I attempt to visit into this site I get a warning about the connection not being secured? This is happening for me across multiple devices.

I believe some sort of certificate expired. Happened to all of us.
Top

Some much needed rainfall today across the area. 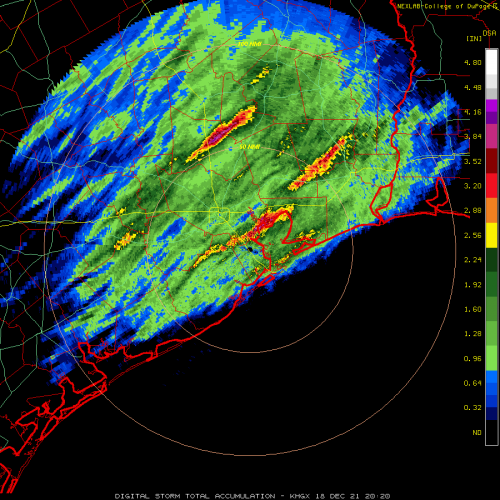