It’s pouring it’s a** off over here!!! I had to drive through it on my way to my sisters house in East Bernard for Thanksgiving. Many cars were pulled over on the side of the road. I had to drive 40mph almost the whole way. I could barely see anything.
Top 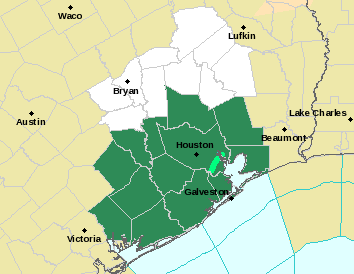 * IMPACTS...Excessive runoff may result in flooding of rivers,
creeks, streams, and other low-lying and flood-prone locations.
Flooding may occur in poor drainage and urban areas.

* ADDITIONAL DETAILS...
- Periods of showers and thunderstorms are expected in and near
the Watch area through Saturday morning. Rainfall rates up to
2 inches per hour are expected with higher rates up to 4
inches per hour in the stronger and slower moving storms.
Locations that have already received heavy rain on Thursday,
especially across southeastern Harris county and Brazoria
county will be most vulnerable to flooding. There might be
periods with little to no rainfall, but when heavy rains
return late Friday the flood risk will increase.
- https://www.weather.gov/safety/flood

You should monitor later forecasts and be alert for possible Flood
Warnings. Those living in areas prone to flooding should be prepared
to take action should flooding develop.

I’m out in West Texas until Saturday missing all the action lol. Looks like my area (Richmond) is about to get a massive soaking
Top

* At 239 PM CST, a severe thunderstorm capable of producing a tornado
was located over southwestern Manvel, moving northeast at 35 mph.

IMPACT...Flying debris will be dangerous to those caught without
shelter. Mobile homes will be damaged or destroyed.
Damage to roofs, windows, and vehicles will occur. Tree
damage is likely.

* This dangerous storm will be near...
Alvin and Brookside Village around 250 PM CST.
Pearland, Friendswood, southwestern South Belt / Ellington and
Greater Hobby Area around 300 PM CST.

TAKE COVER NOW! Move to a basement or an interior room on the lowest
floor of a sturdy building. Avoid windows. If you are outdoors, in a
mobile home, or in a vehicle, move to the closest substantial shelter
and protect yourself from flying debris.

Torrential rainfall is occurring with this storm, and may lead to
flash flooding. Do not drive your vehicle through flooded roadways.

I'm at 1.08 inches so far and its still coming down hard. 4-5 inches have already fallen over parts of Pasadena and Deer Park.
Top

KHOU is very deservedly catching absolute hell this afternoon for interrupting the dramatic ending of an NFL game for a tornado warning and refusing to keep the game video on in the corner of a split screen.

Of course there has to be an interruption for a tornado warning, but there's zero excuse for not split screening. The critical weather info still gets conveyed when 75% of the tv image and 100% of the sound is covering the weather.
Top

The WPC has issued a MODERATE risk for flash flooding tomorrow.Stay weather aware. 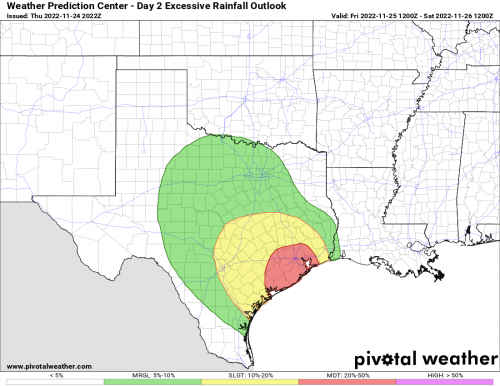 ...THERE IS A MODERATE RISK OF EXCESSIVE RAINFALL ACROSS PORTIONS
OF CENTRAL AND UPPER TEXAS GULF COAST...

High resolution CAMs are beginning to key in on a potentially
significant flash flooding event across the central and upper
Texas Gulf Coast on Friday. Plentiful Gulf moisture and some
instability along the TX Gulf Coast will support repeating
thunderstorms. Most of the significant rainfall in the Moderate
Risk area will be overnight Friday night into Saturday morning
(after 00Z). While this will limit impacts as far as traffic is
concerned, overnight flash flooding has its own dangers for those
in flood-prone areas. Otherwise, the model discrepancies today are
night-and-day better than 24 hours ago. That said, there remain
some minor differences, particularly on where exactly the heaviest
rainfall will be, with some models continuing to hint that the
main forcing will be inland, closer to the upper level low. These
areas will certainly get quite a bit of rain, but without the
instability it's expected that there will be training showers, and
very little in the way of convection. Thus, the 2-4" possible
across north central TX are likely to fall for much of the day and
the first part of the overnight...in other words, spread out over
a long period of time.

Thus, while the Moderate Risk was introduced along the coast,
areas further inland were downgraded from the Slight to a Marginal
risk. Due to the much better consistency (generally speaking) in
the models with the overnight runs, much of the meteorology
described in the previous discussion below remains unchanged. 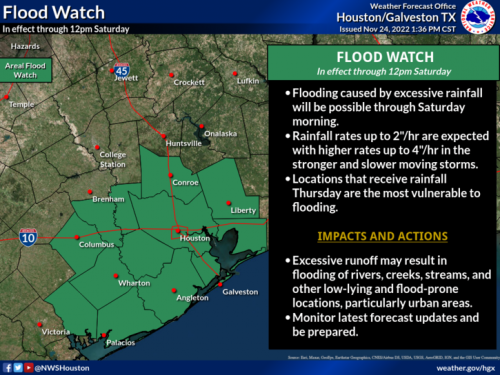 A moderate risk..dang! You don’t see those too often.
Top

The latest CPC forecast has us staying wet through the first week of December.
Top
Post Reply