If we are supposed to have an Arctic front next week, my 7day forecast isn't showing any hints of that. Lows in the 50s.
Top

We have our own tornado alley. 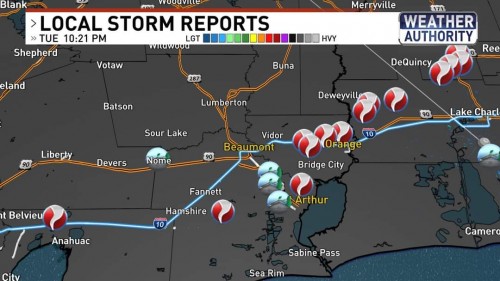 Quieter weather returns to the area today with drier, cooler and
breezy conditions. The strong low system that impacted Southeast TX
yesterday is well east of the region. However, there are still some
weak impulses of energy embedded in the WSW flow aloft, resulting in
additional wraparound clouds. Therefore, low to mid clouds will
persist today across most of the region as the main low continues to
track east. Cold air advection will continue to filter in with north
to northwest breezy winds. Daytime temperatures will generally range
in the 50s, with even cooler readings across our far northern
counties. With breezy winds, it will feel in the 30s and 40s in the
morning hours. Winds should gradually weaken by late this
afternoon/early evening as the pressure gradient relaxes. Mostly
clear skies and continued CAA will result in a chilly night.
Tonight`s low will mainly be in the 30s inland, 40s along the
islands.

High pressure will continue to dominate the pattern on Thursday.
With decent CAA in place, daytime temperatures will struggle to
reach the 60s despite ample sunshine. Highs in the 50s can be
expected. This is 5 to 10 deg below normal. With mostly clear skies,
cooler northerly flow, Thursday night into Friday will be another
chilly night. Overnight lows from the upper 20s to upper 30s inland,
and in the 40s along the islands.

High pressure begins to slide east on Friday evening, ushering in
the return of onshore flow and therefore increasing temperatures,
dewpoints, and cloud cover. Daytime highs will reach the low 60s,
but overnight lows will be noticeably warmer and only cool down to
the upper 40s to low 50s. By Saturday, onshore flow increases
further ahead of a strengthening leeside low over the Southern
Rockies. Therefore, we can expect 20-30% PoPs from streamer
showers on Saturday in the morning through the afternoon
gradually increasing to 60-70% PoPs by the late evening as a
mid-level shortwave over Mexico pushes across the Texas Coast.
Numerous showers will persist through Sunday morning until this
shortwave pushes east towards the Carolinas. Fringes of a surface
high pressure settle in on Monday before quickly pushing
northeast, bringing back onshore flow and increasing temperatures
again. Overall this weekend and early next week will see highs in
the upper 60s to low 70s. Overnight lows will peak in the low 60s
on Saturday night and then drop to the 50s through Sunday and
early next week.

Widespread MVFR ceilings are expected through most of the day.
Conditions should gradually improve by early/mid afternoon with
VFR conditions. Breezy NW winds will prevail with gusts around 20
knots at times. Winds will gradually weaken early this evening
and become light (8 knots or less) through the rest of the TAF
period.

Ya I haven't heard much talk about it. I'm sure it has to do with the bad weather we just had also
Top

I’m 20s and 30s. 50s over the weekend with nasty humid weather but I’ll be around zero in the mountains so y’all enjoy that trash.

Ya I haven't heard much talk about it. I'm sure it has to do with the bad weather we just had also

Gotta go past 7 days. Looks to arrive on Thursday.
Top

Morning update from Jeff. I’m assuming those “wind reports” were gusts - they had to be…

Run-off continues across the area from heavy rainfall on Tuesday.

A daily record 4.04 inches of rainfall was recorded at BUSH IAH on Tuesday

Spring Creek:
Creek has crested and started a slow fall in the headwaters downstream through Hegar Rd and is near crest along the rest of the channel. No significant flooding is currently observed, but minor low land flooding near the creek banks will be possible today. Creek will fall through the day.

Cypress Creek:
Cypress Creek has crested at all locations downstream (east) of US 290 and is slowly falling. Location upstream of US 290 (west) are still slowly rising as run-off from eastern Waller County continues to progress downstream. Additional slight rises on the upper portion of Cypress Creek at Sharp and Katy Hockley is likely this morning, but no significant flooding is forecasted. Overbank flooding continues on Mound Creek, but the creek has crested and is slowly falling and will return within banks later today.

Little Cypress Creek:
Creek remain near bankfull at Becker Rd with minor low land flooding in progress upstream to Roberts Rd including portions of Zube Park. Creek is very slowly falling and will fall back within banks today.

West Fork of the San Jacinto River:
Run-off from both Spring and Cypress Creeks has resulted in a rise in the river to flood stage at US 59 this morning. River is at crest right at bankfull and no significant impacts are expected.

East Fork of the San Jacinto River:
River is elevated this morning and near crest at FM 1485 and Plum Grove, Cleveland is rising and a secondary minor rise on the lower portion of the river will be possible later today into tomorrow as upstream water routes downstream. No flooding is expected.

Lake Houston:
Significant run-off from both forks of the San Jacinto River is resulting in a rise in the lake pool that will approach the top of bulkheads around the lake. Some minor impacts to docks and low lying areas near the lake will be possible today. The City of Houston opened the tainer gates yesterday to help draw down the lake level some ahead of the heavy rainfall.

Lower San Jacinto River:
Flows moving through lake Houston are resulting in a rise in the river at US 90 and Rio Villa. River levels are expected to remain below impact thresholds on the lower portion of the river system. Strong currents and flow are likely today on this portion of the river.

20 reports so far of tornadoes yesterday in SE texas. (Doesn't mean there were 20 tornadoes a lot of those reports are for the same storm.)
I think sometimes people forget that tornado outbreaks don't always consist of many tornadoes. Sometimes it's just one or two strong long track tornadoes that does just as much damage as having multiple smaller tornadoes. So sometimes the data may look like there was a ton of tornadoes in one particular outbreak but those reports may be from the same tornado.
Top

Looks like 7 tornado warnings were issued yesterday for the Houston metro area.With around 14 tornado warnings issued in SE Texas as a whole.
Last edited by don on Wed Jan 25, 2023 10:03 am, edited 1 time in total.
Top

I’ve seen December and February severe outbreaks, but I can only think of one other severe episode in January in my time here (moved here in 2007).

Now that I think about it, I don’t recall any in CLL when I was in school there 2000-2004.
Team #NeverSummer
Top
Post Reply