Still have to get through Friday first but models are already showing another severe weather/ heavy rain setup this coming Tuesday/Wednesday fwiw. 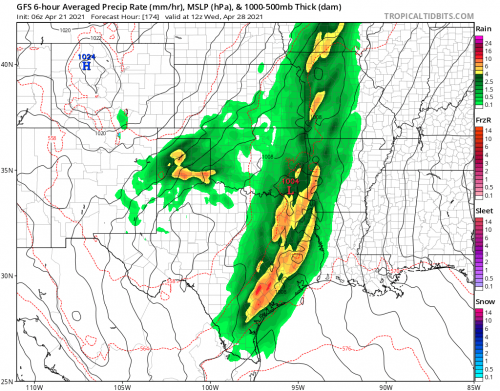 ...THERE IS A SLIGHT RISK OF SEVERE THUNDERSTORMS FROM PARTS OF THE
SOUTHERN PLAINS INTO THE LOWER MISSISSIPPI VALLEY...

...SUMMARY...
Isolated to scattered severe thunderstorms should occur Friday into
Friday night from parts of the southern Plains into the lower
Mississippi Valley. Large to very large hail, damaging winds, and
isolated tornadoes all appear possible.

...Synopsis...
An upper trough should eject eastward from the Four Corners region
and Southwest across the southern/central Plains on Friday,
eventually reaching the lower/mid MS Valley by the end of the
period. An EML with associated steep mid-level lapse rates will
likely be present over much of OK/TX. A low-level jet should
continue to transport low-level moisture northward through the day
across the southern Plains, with a warm front potentially reaching
as far north as the OK/KS border vicinity. At the surface, a weak
low over the TX Panhandle Friday morning is forecast to develop
southeastward to the vicinity of southwestern OK/western north TX by
Friday evening while gradually deepening. A dryline should extend
southward from this low across portions of west/central TX. The
surface low should continue developing eastward to the lower MS
Valley late Friday into early Saturday morning, with a composite
dryline/cold front sweeping eastward across central/east TX. Rich
low-level moisture should advance northward ahead of the low/front
across much of LA and southern MS late in the period.

...Southern Plains...
Large-scale ascent associated with the shortwave trough should
overspread the warm sector across OK/TX by late Friday morning into
the early afternoon. As the cap erodes, robust convective
development appears likely along the eastward-mixing dryline. There
is still some uncertainty regarding the position of the dryline by
Friday afternoon across the southern Plains. Regardless, the
presence of rather steep mid-level lapse rates, increasing low-level
moisture, and diurnal heating should support moderate to locally
strong instability across the warm sector in OK/TX by Friday
afternoon. Deep-layer shear across this region appears strong enough
to support organized severe thunderstorms, including supercells.
Current expectations are for convection to initially develop along
or just east of the dryline, and subsequently move
east-northeastward. Large hail appears likely with this initial
activity, and isolated very large hail (2+ inch diameter) may also
occur. A veering/strengthening wind profile suggests some threat for
isolated tornadoes with any storms that can remain semi-discrete
through early Friday evening. Eventually, upscale growth may occur
along the cold front, with a damaging wind threat potentially
continuing into parts of east TX late Friday. Other isolated severe
storms may develop in the low-level warm advection regime in the
open warm sector along parts of the middle/upper TX Coast into east
TX through the day, posing a risk for all severe hazards.

...Sabine River Valley into the Lower Mississippi Valley...
A south-southwesterly low-level jet is forecast to strengthen
considerably from east TX into LA and southern MS Friday
evening/night. Surface-based convection appears increasingly
probable across this area as low-level moisture quickly increases.
The EML may advect eastward over this region, and NAM forecast
soundings show a favorable thermodynamic and kinematic environment
to support organized severe thunderstorms along/south of the warm
front. All hazards, including tornadoes, will be possible through
Friday night into early Saturday morning. The best severe threat may
be focused with the eastward-developing low-level jet, but
additional severe storms along the cold front may also occur. Even
with this seemingly favorable setup for severe thunderstorms, the
potential exists for afternoon storms with low-level warm advection
to slow the northward advance of the warm front and limit
instability. Once uncertainty regarding the evolution of these
afternoon storms is better resolved, greater severe probabilities
for tornadoes may need to be included for parts of the Sabine River
Valley vicinity.
Top

It's a bit on the chilly side for me this morning, especially for late April.

No whining this summer that we didn't have a spring!
Top

After looking at some of the 12z models i wouldn't be surprised at all to see most of the area locally to be under an enhanced risk Friday,and maybe even a moderate risk for severe weather in northeast Texas where shear will be greater.

There looks to be 2 main rounds of storms,the first with the warm front during the afternoon where there could be discreet supercells.And the second round coming with the cool front Friday night in the form of a squall line.
Top

Enjoy it. Probably won’t feel it again till October.
Top

I don't like the look of the 3k NAM showing numerous discreet supercells moving from the gulf, and supercell clusters over the area. 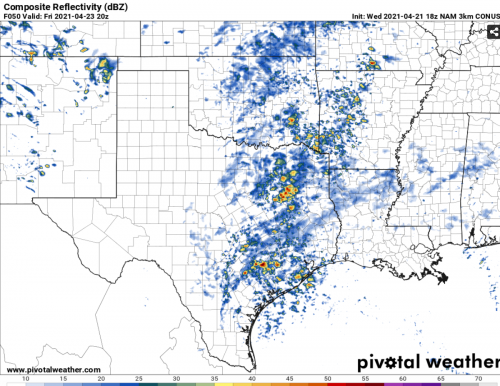 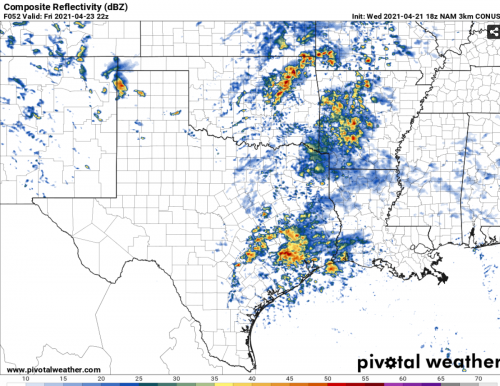 NWS is already mentioning the "C" word for next week's system.

Hoping for some decent rains this Friday.
Top

Hoping for some decent rains this Friday.

I’m not sure why. Models look decent for next week and there’s a pretty significant event that could happen after that to start off May.
Top

A/C off and sunny. Works for me.
Top
Post Reply

Users browsing this forum: No registered users and 36 guests