Will post Monday weather briefing from Jeff in the September Topic since he's looking ahead to Labor Day Weekend...

Tropical Storm Watches and Warnings are now in effect for much of the Windward Islands.

Discussion:
While Dorian remains small and compact, recent satellite images show a decent increase in the convective pattern of the tropical cyclone with explosions of deep convection near and over the center. NHC has increased the intensity to 60mph with an estimated central pressure of 1002mb. Additionally, Dorian has featured the development of some ragged banding features this morning and the overall look of the system is improving.

Track:
Dorian is located 205 miles ESE of Barbados and is moving toward the west at 14mph. This westward motion will continue today with a gradual turn toward the WNW as the system moves through the Windwards Islands tonight and Tuesday. Once in the eastern Caribbean Sea, Dorian will begin to turn toward the NW under the increasing influence of a large upper level trough over the southern Bahamas and Cuba which will cause a weakness in the sub-tropical ridge of high pressure north of the storm. On this track, Dorian will be approaching the eastern portions of the Dominican Republic Thursday and how the system interacts with the tall mountainous terrain of that island will be key to the eventual outcome for the system. Toward the end of the period high pressure does begin to build back westward north of Dorian, so if the system survives the Dominican Republic a continued WNW track into the Bahamas looks most likely.

It should be noted that the track guidance through 5 days continues to be in very good agreement with little variation in models nor model cycles which yields a fairly high confidence track forecast.

Intensity:
Unlike the track forecast, the intensity forecast is much more problematic as there continues to be significant spread in the intensity guidance and the overall small nature of Dorian makes it extremely vulnerable to surrounding atmospheric challenges such as wind shear, dry air, and land interaction. Thus far, the system appears to have been able to fight off the dry air intrusions as noted on the evening Barbados sounding yesterday and the high altitude mission dropsondes that was flown both showing significant mid level dry air especially to the west of the system. Such dry air when entrained into the system results in the collapse of the deep convection and without sustained convection the surface circulation has a hard time maintaining itself. Wind shear is forecast to remain light over the next 24-48 hours, but then increase as the system reaches the NE Caribbean Sea toward the middle to end of the week. Several of the global forecast models weaken Dorian to a weak TS or even open wave over the eastern Caribbean Sea and this is certainly possible while other models make Dorian a hurricane. Dorian is the type of system that could see large swings in intensity in a short period of time. NHC continues to indicate Dorian becoming a hurricane briefly over the eastern Caribbean Sea and then significant weakening as the small system interacts with the mountains of the Dominican Republic. 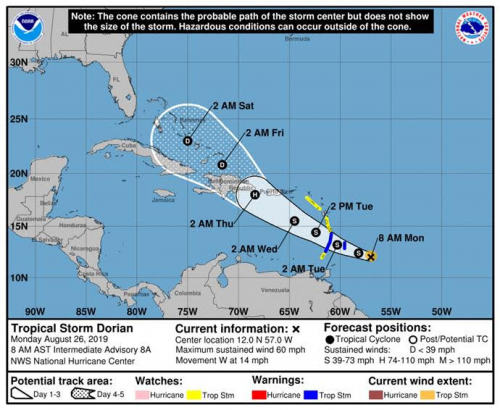 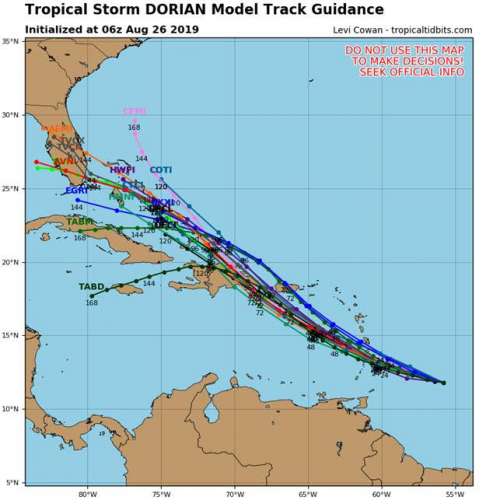 Gulf (Late week/weekend):
Global models indicate that a tropical wave or disturbance will move into the eastern Gulf of Mexico late this week and then slowly move westward over the Labor Day weekend. This feature would be located south of a frontal system along the US Gulf coast and south of building high pressure over the SE US and mid Atlantic. None of the global models show any significant strengthening with this system but do attempt to close off a weak surface low over the central and western Gulf of Mexico this weekend into early next week with little motion. Something to keep an eye on since it is late August and things can quickly change this time of year.

Looks like the tropics are about to get pretty active:

Spetember is going to heat up for sure.
Top

Where did you get this? Would love to capture this map
Just because you're disabled, you don't have to be a victim
Be Weather Aware & Prepared!
Barbara Jordan Winner in Media
Disability Integration Consultant
Top

Where did you get this? Would love to capture this map

Found it on Storm2k under the Talking Tropics thread.
Top

0z GFS run is good times. It has the ghost of 90l in the central gulf and Dorian hitting a wall and goes due w across fla exiting n of tampa.
http://www.icyclone.com
Top

I think it’ll go more towards south Florida around Miami and then bend back west with that strong ridge building in. After that, who knows.
Top

Both the overnight ensembles continued to shift w, especially the euro. However the operational is still further up n through Florida before turning more towards the nw.

NHC guidance shows a slight bend to the left at the longer range. Key will be how much the weakness to the n is before the ridge builds back in.

I think the threat for the ngom (after any fla impact) has went up slightly. If the trend towards the w continues then it will be time to assess any potential threat here. That's even if Dorian survives trek out of the Caribbean.

More often than not these trends switch around so I wouldn't be surprised to see a shift back to the e today.
http://www.icyclone.com
Top
Post Reply